The cut flowers Industry in France

As in Southern France most people only speak of Mimosa this term is used here instead of Acacia.

The Mimosa plantations greatly contribute to the beauty of the landscape. They are situated on the spurs of the Esterel mountains. Between the rows of Mimosa trees, often rows of Eucalyptus are planted to serve as a fire barrier. The seasonal production is subject to climatic challenges like frost, heavy rains, too hot temperatures. The cultures on steep hills make the work difficult and require a lot of manual labour during the season.

Warm winters and a favourable sun have allowed that this beautiful plant could thrive in the Tanneron area. The Mimosas in this area are hybrids of Acacia dealbata: Mirandole (60%), Astier (10%) and Gaulois (30%), flowering in this sequence between December and February. The Mimosa of four seasons (Acacia retinoides = Mimosa floribunda) is not planted much any more: it has too much need of water and manual care. To extend the harvesting periods from November to March the growers have extended their range of varieties and they also have found out how to force blooming in the right moment.

Cultivated trees are mainly hybrids of Acacia dealbata with A. baileyana. Mimosas Mirandole, Tournaire, Le Gaulois and President Doumergue are cultivars that multiply only by grafting. Mimosas rustica and Bon Acceuil are hybrids of A. decurrens and A. baileyana. Mimosa floribunda is a synonym of Acacia retinoides, also called the Mimosa of the Four Seasons. It has various variations like Glauca, Lisette or Imperialis.
These taxa have greener leaves than the wild A.dealbata, which harmonizes better with the yellow flower

Harvest is from December to February. It is all very small family business with appr. 200 ha cultivated land.

Approximately 80 % of acacia plantations are cared for by growers over 50 years old. The number of plantations has dropped from 200 in 1989 to 162 in 2002. In the same period the planted area has dropped from 228 ha to 204 ha. The production was biggest in the department Alpes Maritimes (10..800.000 stalks ) followed by Var (6.500.000) and minor quantities in Pyrenees Orientales and other departments. A total of 18.633.260 stalks ( equivalent to appr. 600 tons) produced in 2002/2003 had a value of appr. 3- 4,0 Mio Euros.
Two communities are responsible for 60% of the cultivated surface in Alpes Maritimes. This preference can be explained with the acid soils of the Tanneron mountains, which the Mimosa is better adapted to.

The retail sales price is fluctuating heavily between 4 and 8 Euro per kg depending on the month and the year. The main season brings between 5,50 and 6,50 Euro/kg. 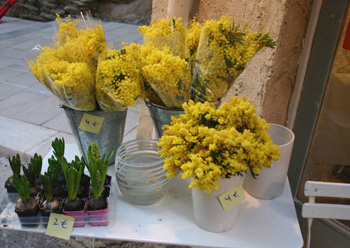 Cut flowers offered in the old town of Bormes-les-Mimosas, 9.2.05

Mimosa cultures from Italy are starting to compete, but until now they pose no big problems for sales.
Certain producers have joined the cooperative “Europe Mimosa”. Others unite themselves behind a brand “Azur Mimosa”. The flowers are mainly sold to Northern Europe (Netherlands, Germany, Switzerland, Norway) or exported to the United States, Canada and Japan. The Mimosa is a “ fleur d`appel “ on the Nice market. The wholesale trade handles 98% of production, thereof 51 % by exporters and wholesalers. The rest is commercialized on the wholesale market (MIN), by the cooperative or directly by export. Only
1% of the cut flowers are sold directly by the producer.

The commercialization of the Mimosa is supported by the forcing technique.

Some interesting data on the economy of growing acacia are given in Bushfoods magazine: http://www.hotkey.net.au/~bushfood/acacias.htm

The major enemies of the acacia in the region are
a) frost, with temperatures going below -12 degr C, killing trees
b) fires
c) land development

The farmers supplement their business by growing different Eucalyptus species - sold also as a component for cut flower bouquets. The Eucalyptus helps as a fire barrier.

Much of this information has been taken from AGRESTE a 2-page statistical service of the Ministery of Agriculture, March 2005, ISBN 2-11-091011-9