During our holidays in South Africa we made many „bush walks“ to look for trees/bushes and the insects living on them. In this little report I relate my encounters with Acacias s.l., mainly Vachellias and Senegalias.

Our first stop was in Faircity Roodevallei near Pretoria on January 4th.

A broad dirt road led to the reservoir behind the Roodeplat dam on Pienaars River. Between road and fence small Vachellia karroo trees showed their last bloom. They were heavily infested by Ravenelia galls, which at that time were sporulating. 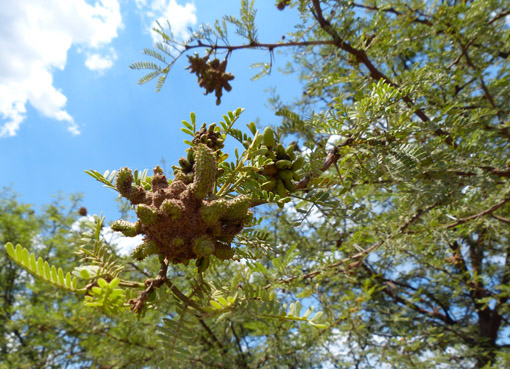 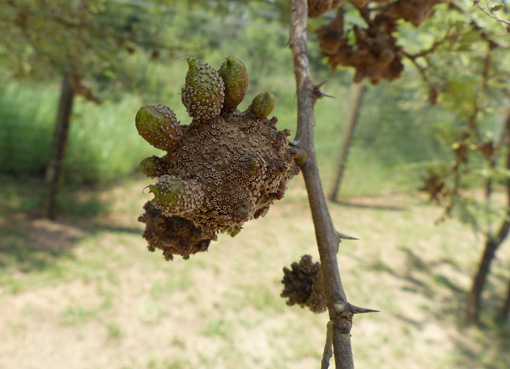 A cactus was growing on a big Vachellia. 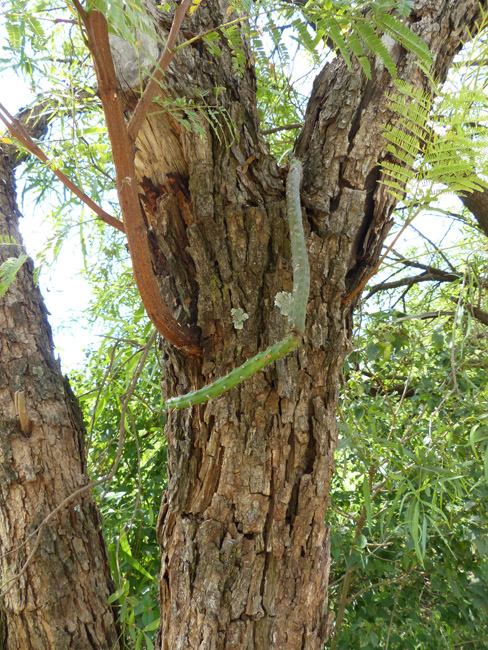 The next day we travelled to Mutapa Gate Lodge in the Waterberg Mountains near Mokopane. 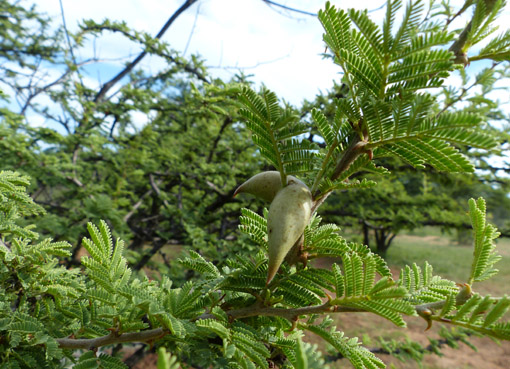 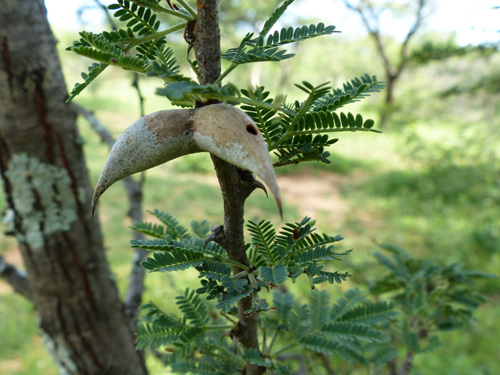 On the old /white thorns the hole can be seen, where the ants penetrated and built their nest. 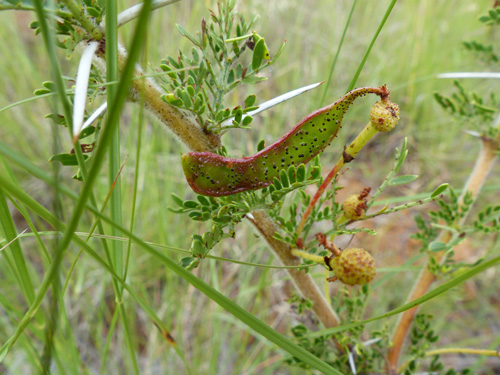 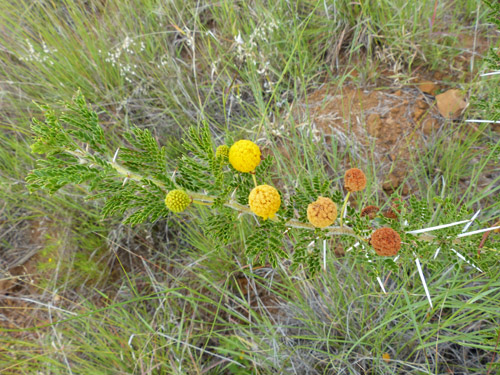 The 3000 ha Kieuw Game Range lies at the northern end of Limpopo province not far from the Botswana border.

This northern area is the only habitat for Vachellia nebrownii (Water thorn) in South Africa: 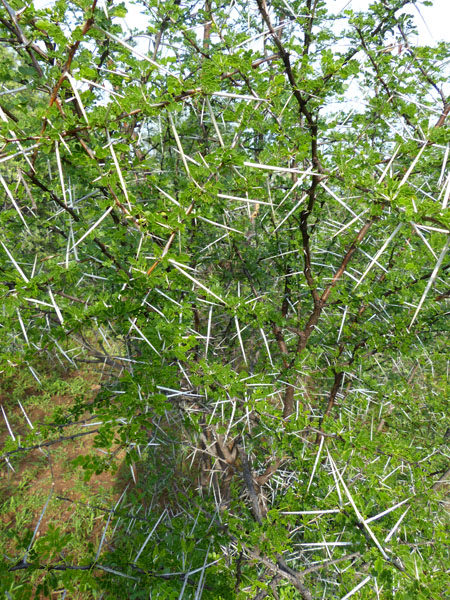 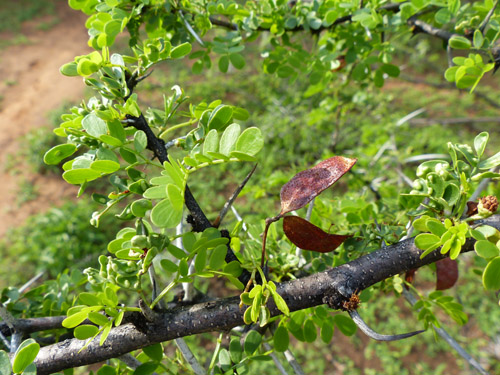 On Vachellia tortilis „decorative“ galls could be observed: 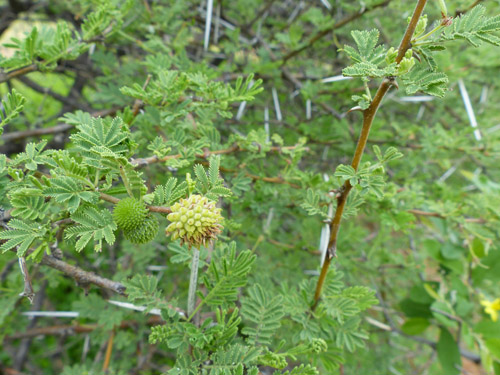 Our next stop was Mogalakwena River Lodge

This year we were not very lucky there. It rained a lot and Hanni was ill. I walked around a bit and recognised Vachellia tortilis, Senegalia nigrescens and S. erubescens.

On Jan. 13th we drove to Sigurwana, „Close to Heaven“ in the Soutpansberg Mountains.

The 6000ha Nature Reserve is very remote (only to be reached by 4x4) and has beautiful landscapes. We photographed Protea caffra, White Seringa, Cape chestnut, Waterberry, Pterocarpus angolensis, Solanum giganteum, Combretum molle and many other interesting trees – but this is not Acacia country. The Senegalia caffra in the garden was obviously introduced.

A bit further down at the Southern slope of the Soutpansberge near Louis Trichard is the well kept lodge Madi a Thava. 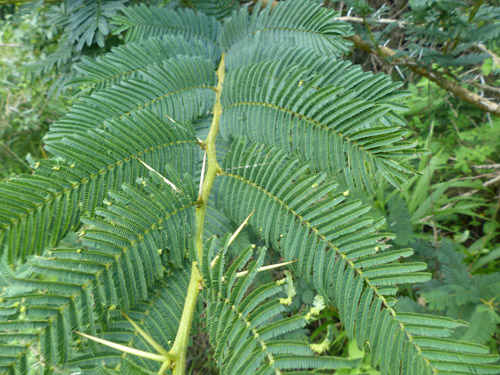 On Jan. 17th we reached Punda Maria Camp in the North of Krueger National Park.

Again I photographed dozens of interesting trees: Mopane, Albizia, Marula and False Marula, Bauhinia, Red Bushwillow and Silver Cluster leaf. The African Wattle was partially still blooming – but there were not many Acacia trees.

On the northern slope of the Soutpansberg Mountains lies Mashovhela Lodge. The 3000 ha „ Morning Sun Nature Reserve“ is a highly diverse biotope with hundreds of different trees. In the valley, Vachellia karroo was blooming abundantly. On the other side of the mountain, the owner bought another lodge, Lokovhela, which hosts many non-indigenous trees, especially Eucalyptus and an invasion  of the Australian Acacia mearnsii: 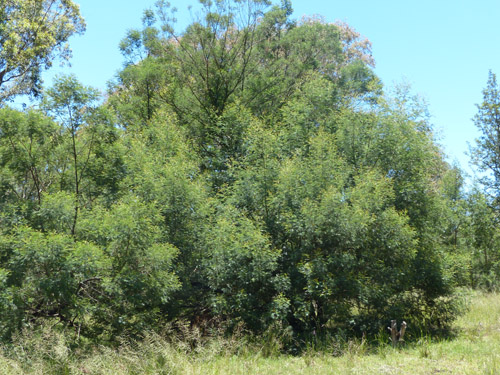 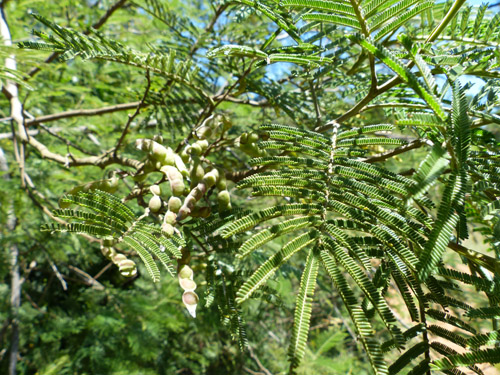 The next stop was Mopane Bush Lodge opposite the Mapungubwe National Park bordering the Limpopo river.

As the name tells, this is Mopane country. But there is also a healthy community of Vachellia stuhlmannii with its interesting hairy pods: 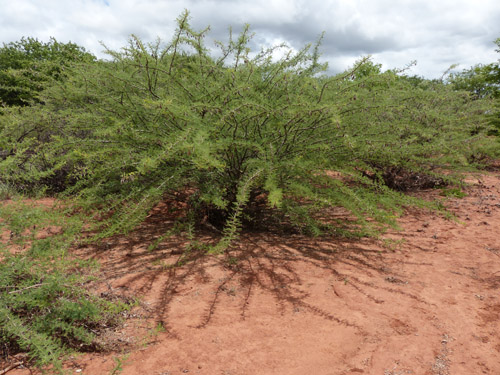 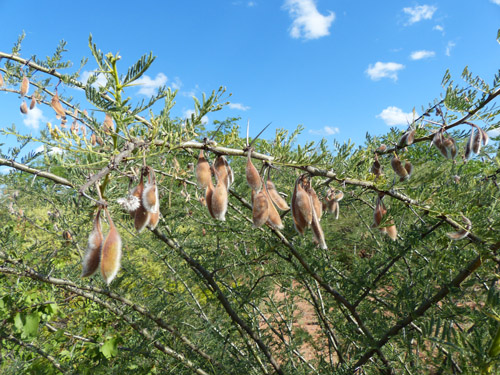 Below you see the sickle shaped pods of Vachellia grandicornuta and myself in front of a blooming Senegalia senegal: 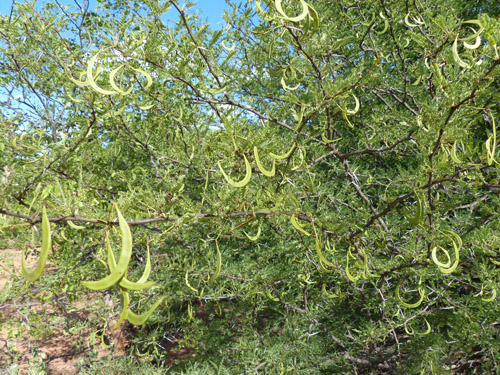 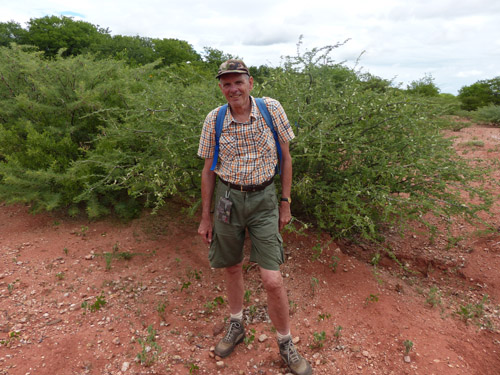 We then went to the Tiveka Game Lodge, 30 km south of Polokwane.

In the vicinity many quite large Vachelli rehmanniana trees could be found with their impressive leaves and the knobbly fresh sprouts. They are the home of the colourful weavers: 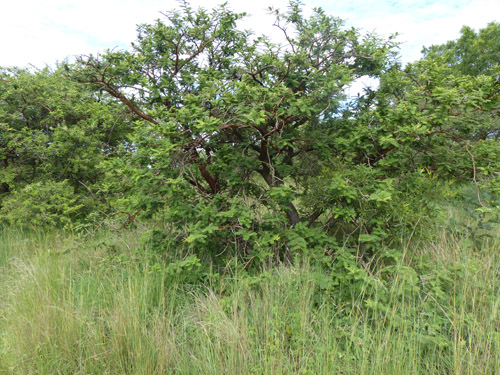 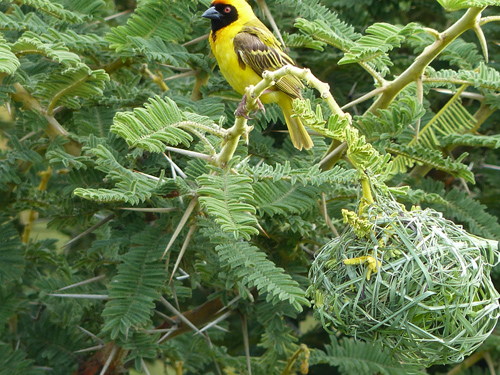 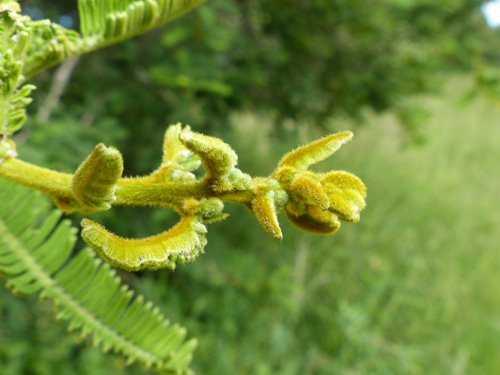 As there are domestic as well as wild animals in this area, the Vachellia tortilis was heavily browsed: 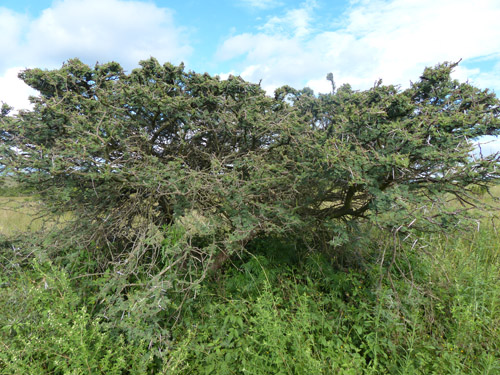 End of January we spent some days in the Kololo Game Reserve in the Waterberg Mountains. It is adjacent to Welgevonden Game Reserve, which is famous for its many white rhinos.

The area is mainly grassland, with some interspersed hills. We found Vachellia karroo, V. galpinii and V. sieberiana (full of weaver nests). The latter grows up to 17m high, often has a yellowish-brown, flaky bark: 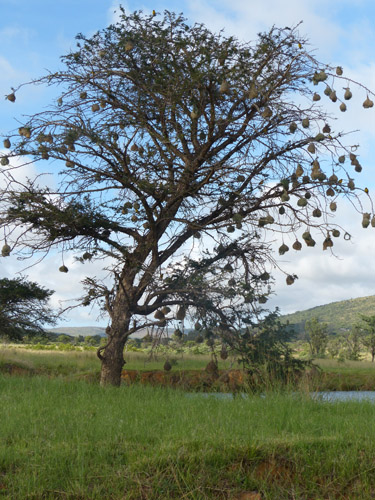 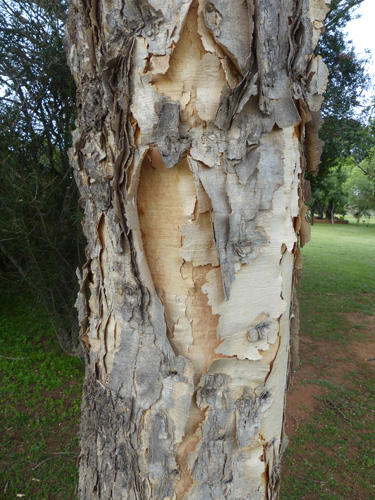 Another Vachellia was densely covered with Psychid-nests, which from afar looked like dry fruit. 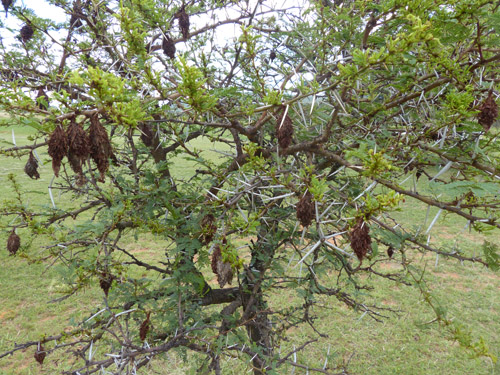 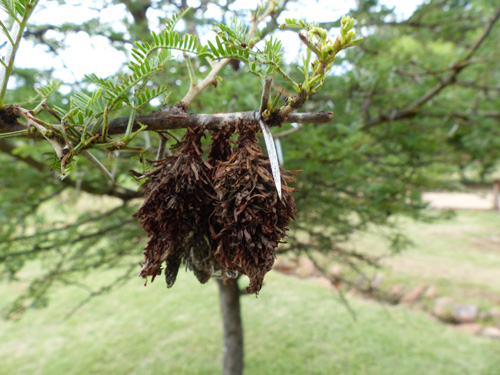 On the way back to Johannesburg we passed by Kgaswane Mountain Reserve near Rustenburg. Again a Vachellia, V. grandicornuta was infested with Ravenelia: 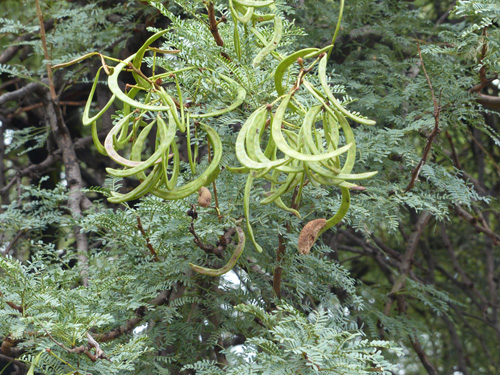 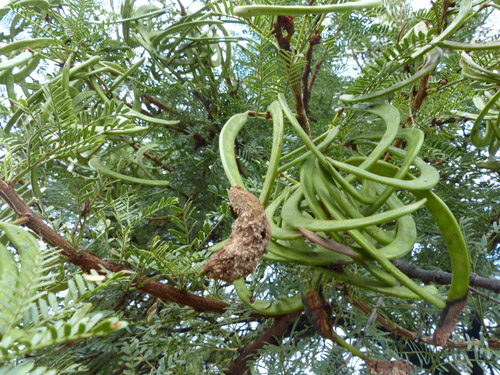