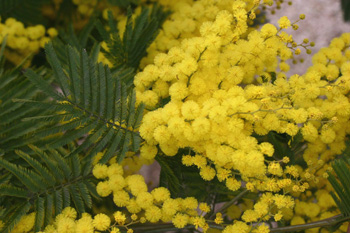 Mimosa Mirandole = Acacia dealbata x A. baileyanaAcacia farnesiana reached the Alpes-Maritimes in the 18th century. This type of Mimosa is especially suited for perfumes. The first Acacia dealbata was imported in 1864 from Australia and planted in the garden of Castle de la Boca in Cannes. Around 1870 an important number of plants is introduced to be planted in the gardens of the rich people that spend the winters in this area. In 1880 Acacia trees were planted in Antibes and along the boulevards of Cannes.

Some horticulteures have cultivated this tree with the nice smelling flowers. The Mimosa trees conquered all the western part of the department (Tanneron, Pegomas) to the benefit of the perfume industry when prices were still very good. Around 1910 the first hybrids appear. Having found an appropriate soil, the Mimosa extended throughout the Massif des Maures and progressively replaced the local vegetation: cork oaks, l`arbousier and the heather.

After the extremely cold winter of 1929, several shoots came out again and the business of the cut flower took off with the planting of even more attractive Mimosa varieties. During this time 607 hectares of Mimosa cultivation existed in the department Alpes-Maritimes. The most abundant varieties were Acacia dealbata (70%), Acacia retinoides (20%), hybrides (8%) and Acacia podalyriifolia (2%). During the war, specialised labour was scarce and the plantations of Mimosa for perfumes were abandoned in favour for the Mimosa for flowers. 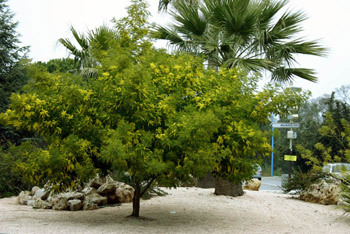 Mandelieu 5.2.05Additionally a rise in prices for cut flowers encouraged the change in business. Cassie (the essence from Acacia farnesiana) was in less demand by perfumeries, and the plantations of the Cassier (A. farnesiana tree) have been replaced more and more by Mimosa trees for cut flowers.

The freezing temperatures of 1956 had an disastrous effect: the planted area fell from 800 to 430 hectars with appr. 100 producers.
The very cold winters of 1985 and the raging fires of 1986 have favored the planting of other plants like the eucalyptus.